The sinking of Lampong poetry
about
The eruption of Mount Krakatau

Long before foreign researchers wrote about the eruption of Mount Krakatau (Krakatoa, Carcata) on 26, 27, and August 28, 1883, a native witness has written a very rare and interesting, three months after the eruption of  Krakatoa through Lampung Karang (Lampong sinking) poetry .

“Scientific studies and bibiliografi about Krakatoa almost missed include only indigenous written sources, which record the testimonies of the eruption of Krakatoa in 1883. Two years of research, I found the only native testimony in written form, “he said. Before the eruption on 26, 27, and August 28, 1883, the Krakatoa volcano has coughed since May 20, 1883. Krakatoa eruption caused pyroclastic as high as 70 km and 40-meter high tsunami that killed about 36,000 people. 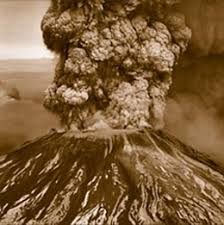 The eruption that led to the three islands adjacent to each other; Sertung Island, Little Rakata Island, and the island of Rakata. Suryadi explained, as long as it is to be reading about the eruption of Mount Krakatoa is a complete research report GJ Symons et al, The Eruption of Krakatoa and Subsequent Phenomena: Report of the Krakatoa Committee of the Royal Society (London, 1888). 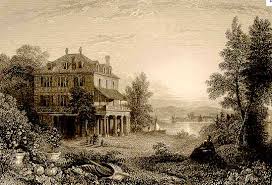 While the indigenous written sources published in Singapore in printed form stones (litography) in 1883/1884. Kolofonnya recorded in 1301 AH (November 1883-October 1884).

The fourth edition of this poem, the last edition as far as I know, This is the poem entitled The Karam Lampung (36 pages). This fourth edition also published in Singapore, Safat bertarikh 10 1306 H (October 16, 1888), “said Suryadi, the dozens of research results have been published in various international journals.
According to Suryadi, the fourth edition of the text special poem written in Malay and Arabic wear-Malay (Jawi). From the comparison of the text which he did, there are significant variations between each edition. This indicates that kelisanan influence is still strong in the tradition of literacy that began to grow in the archipelago in the second half of the 19th century.
Suryadi who managed to identify the place where copies of all editions of Lampung Karam poem that still exists in the world until now to mention, Lampung poem written Karam Mohammed Saleh. He admitted writing the poem in Kampung Bangkahulu (then called Bencoolen Street) in Singapore. “Muhammad Saleh claimed was in Cape Coral when the eruption of Krakatoa occurred and witnessed the great natural disaster that with his own eyes. It is likely that the poet was a victim of the eruption of Krakatoa which went fled to Singapore, and brings scary memories of natural disasters mahadahsyat it, “he said.
Lampung Karam or the sinking of Lampong poetry can be categorized as a poetic journalism, because the more strongly highlight the nuances of journalism. In Lampung Karam Poetry 38 pages in length and 374 verse, Mohammed Saleh dramatically illustrate the great disaster that followed the eruption of Mount Krakatoa in 1883. He told the destruction of villages and mass death caused by the eruption. Areas such as Earth, Kitambang, Gutters, Kupang, Lampasing, Umbulbatu, Benawang, Rhino, Limes, monkey, Mount Bases, Gunung Sari, Minanga, Tanjung, Kampung teba, Middle Village, Kuala, Rajabasa, Cape Coral, Island also Sebesi , Sebuku, and Peacock devastated by the tsunami, mud, and rain of ash and rock.
The author tells how in a heartbreaking situation and turmoil, people are still willing to help each other help each other. However, not a few who take the opportunity to enrich themselves by taking the property and other people’s money is overwritten disaster. Besides tracing the editions published poem Lampung Karam remaining in the world until now, the study also presents transliterations Suryadi (control characters) text of this poem in the Latin alphabet.

The legendary annihilation in 1883 of the volcano-island of Krakatoa — the name has since become a by-word for a cataclysmic disaster — was followed by an immense tsunami that killed nearly 40,000 people. Beyond the purely physical horrors of an event which has only very recently become properly understood, the eruption changed the world in more ways than could possibly be imagined. Dust swirled round the world for years, causing temperatures to plummet and sunsets to turn vivid with lurid and unsettling displays of lght. The effects of the immense waves were felt as far away as France. Barometers in Bogota and Washington went haywire. Bodies were washed up in Zanzibar. The sound of island’s destruction was heard in Australia and India and on islands thousands of miles away. 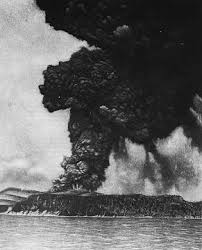 The 1883 explosion on an uninhabited island in Indonesia was one of the most catastrophic in history. Before the eruption, this island in the Sunda Straits between Java and Sumatra islands was made up of three stratovolcanoes that had grown together.

In the summer of 1883, one of Krakatau’s three cones became active. Sailors reported seeing clouds of ash rising from the island. The eruptions reached a peak in August, culminating in a series of tremendous explosions. The most ear-shattering eruption was heard in Australia, more than 2,000 miles (3,200 kilometers) away.

Ash was sent 50 miles (80 kilometers) into the sky and blanketed an area of 300,000 square miles (800,000 square kilometers), plunging the area into darkness for two and a half days. The ash drifted around the globe, causing spectacular sunsets and halo effects around the moon and sun.

The explosions also sent as much as 5 cubic miles (21 cubic kilometers) of rock fragments into the air. The northern two-thirds of the island collapsed under the sea into the newly vacated magma chamber. Much of the remaining island sank into a caldera about 3.8 miles (6 kilometers) across.

The collapse set off an immense series of tsunamis, or giant sea waves, that traveled as far as Hawaii and South America. The largest wave loomed 120 feet (37 meters) high and destroyed 165 nearby settlements. All vegetation was stripped bare, structures were
demolished, and some 30,000 people were washed out to sea in Java and Sumatra.

Krakatau was quiet until the 1920s, when volcanic activity began again. Since then, eruptions have built a new cone, Anak Krakatau, or “child of Krakatau” in the center of the caldera created in 1883 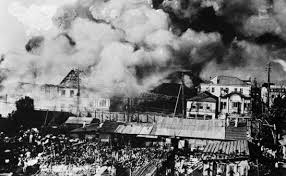 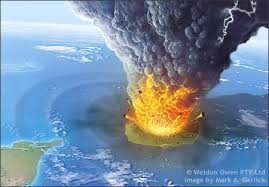