Bhutan’s 31-year-old king has married a student 10 years his junior in an isolated valley high in the Himalayas where thousands of nomads and villagers gathered to celebrate.

The hugely popular Jigme Khesar Namgyel Wangchuck wed Jetsun Pema, the daughter of an airline pilot, in a colourful Buddhist ceremony at a 17th-century fortified monastery in the ancient capital of Punakha.

Set between two rivers and accessible by footbridge, the stunning building contains the remains of a Tibetan holy man said to be the founder of modern Bhutan.

Proceedings were beamed live across the staunchly royalist but isolated country of 700,000 people, who, decked out in national dress, will mark the occasion with dancing, singing and drinking over three days of public holiday.

The country, which banned foreign television until 1999 and is the only nation in the world whose government pursues “Gross National Happiness” for its people instead of economic growth, is set for an outpouring of joy.

Bhutan – His Majesty grants audience to the Crown Prince of Norway

His Majesty the King granted an audience to the Crown Prince of Norway, His Royal Highness Prince Haakon Magnus at the Lingkana Palace, today.

His Royal Highness is accompanied by Her Royal Highness Crown Princess Mette-Marit and the royal children. They are in Bhutan on a 10-day private visit.

His Majesty the King also hosted a luncheon at the Lingkana Palace.

“You can be sure that our happiness is increasing,” joked Karma Tshiteem, the head of the Gross National Happiness Commission, which vets government policy to ensure it increases the mental well-being of citizens.

“It’s a big day for all Bhutanese,” said 32-year-old housewife Tshering Lhamo in the capital Thimphu. “Everyone loves the king and for my generation we have never seen a royal wedding before.”

After a private ceremony in front of 300 VIPs, the new queen and her husband, the fifth in a line of hereditary rulers who have reigned for the last 100 years, will greet crowds of well-wishers at a public celebration.

Thousands of nomads, who roam for most of the year with their animals in the upper reaches of the mountains, have come down to the valley to join in, alongside others who will travel by foot from nearby villages.

Security is tight, with phone networks jammed and police enforcing strict controls on vehicles in a wide area surrounding the monastery.

On Monday, two small bombs went off in a town on the border with India injuring four people, in attacks claimed by an insurgent group based in Nepal fighting for the rights of ethnic Nepalese in Bhutan.

The king, an Oxford-educated Elvis fan crowned in 2008 who is known to invite his subjects round for tea, had requested a simple and traditional ceremony. No foreign VIPs or fellow royals have been invited.

The announcement of the nuptials in May broke the hearts of the monarch’s many admirers.

The “prince charming of the Himalayas” was once mobbed on a trip to Thailand by weeping teenagers on one of his rare official foreign trips.

Few people know much about their future queen, save for some details about her competitiveness on the basketball court, her tender age and her striking looks.

Pema, who studied in London and is pursuing a degree in international relations, is admired for her beauty and the apparent impact she has had on the king, who talks often of his love for her, even holding her hand at public functions. The Bhutanese royal family are credited with bringing stability to the formerly war-wracked nation and ensuring its independence despite giant neighbours India and China to the north and south.

Bhutan, which has never been colonised, remained in self-imposed isolation for centuries and is still wary of outside influence and the impact of globalisation.

The country had no roads or currency until the 1960s and continues to resist mass tourism to this day. Foreign tourists must travel in groups with official guides and pay fees of up to $200 a day.

Bhutan’s much-publicised royal wedding that will see King Jigme Khesar Namgyel Wangchuck tying the nuptial knot with his childhood sweetheart Jetsun Pema began on Thursday morning amid chanting of hymns by Buddhist monks in the historical city of Punakha.

Thousands of Bhutanese, including children and women, started thronging the ground near the stunning 17th century fortress in this ancient city, 71 km from capital Thimphu, from various parts of the tiny Himalayan hingdom as early as 5 am (local time), braving intense cold.

Majority of the 71 lakh population remained glued to their television sets to watch the wedding ceremony which was being telecast live on Bhutan Broadcasting Service TV.

The elaborate wedding ceremony, which is being conducted according to Bhutanese Buddhist traditions, began at 4 am with the initiation of special prayers by 100 monks led by His Holiness Je Khenpo, the head monastic preceptor.
Image: King Jigme Khesar Namgyel Wangchuck greets journalists after his marriage to Queen Jetsun Pema at the Punkaha Dzong in Bhutan’s ancient capital Punakha 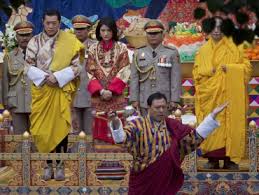