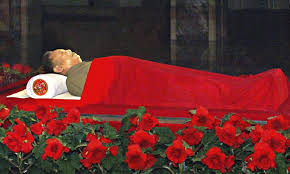 2 days ago
at the Kumsusan Memorial Palace in Pyongyang

a glass coffin a memorial palace in Pyongyang

World leaders call for reform after Kim Jong-il, the leader of North Korea, dies of a heart attack on a train in Pyongyang.

A nation in tears:

SEOUL, South Korea – North Korea announced the death of supreme leader Kim Jong Il and urged its people to rally behind his young son and heir-apparent Monday, while the world watched warily for signs of instability in a nation pursuing nuclear weapons.

People on the streets of the North Korean capital, Pyongyang, wailed in grief, some kneeling on the ground or bowing repeatedly as they learned the news that their “dear general” had died of heart failure Saturday at age 69 while carrying out official duties on a train trip.

North Korean leader Kim Jong Il is dead, according to state television from Pyongyang. There are currently no independent reports confirming his death.

North Korea’s state-run television announced Kim died on Saturday of “physical and mental overwork,” the BBC reported. The AFP said his death was from a heart attack. He reportedly died while traveling.

The world’s only inherited communist ruler, Kim was reported to have been battling health issues that left him further isolated from the outside world.

North Korea’s leader Kim Jong-Il peers out of a car window after a meeting with Russian officials on August 24, 2011. 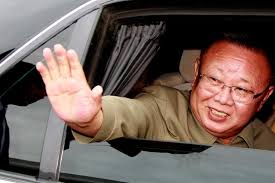 North Korean leader Kim Jong Il has been dead for years and replaced by a number of look-alikes, a Japanese academic claims. 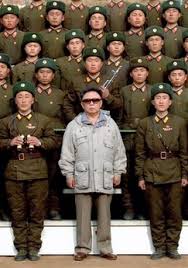 and the information in 2009

“We are overjoyed to see the magnificence of our Dear Leader,” emaciated peasant Gwok Shi-Mon said. “He may not be as sprightly as he once was, but his strength and wisdom still show through that glass, coffin-like box in which he sleeps every night.”

Although North Korea denies that Kim, who apparently died last year, is dead, South Korean and U.S. sources said the Kim Jong-Il encased in glass in the rotunda of the reclusive country’s capitol building is indeed the leader’s dead, embalmed body.

“He’s not been seen in public in months,” South Korean Gen. Kai Vi-Tam said from Seoul. “The footage the state-run news agency plays of him is the same every time. It’s of Kim drinking a can of Tab while standing on a balcony waving to an adoring throng of people. At one point Kim picks up a copy of Michael Jackson’s ‘Thriller’ album, and then kills a low-level soldier for accidentally scratching the record while putting the needle on it so the crowd could dance to ‘Beat it’”

Even though Kim lay motionless as hundreds of thousands of North Koreans filed past him, laying crudely wrapped birthday presents in front of the glass box as they passed, His people said they took great comfort in knowing the Dear Leader is close by.

“I could tell the Great Leader was thinking about me as I placed a festively wrapped package of my last pack of cigarettes by his feet,” steel worker Xi Hun-Don said. “I would yank out my own eyeballs with an ax should the Dear Leader deem my cigarettes worthy enough to smoke. That would be a birthday present to me

North Korea expert Professor Toshimitsu Shigemura, a professor of international relations, says Kim died of diabetes in 2003 and has been substituted by up to four body doubles ever since.

Driven by a fear of assassination, Kim allegedly trained his doppelgangers — one of whom underwent plastic surgery — to attend public appearances.

“Scholars don’t trust my reasoning but intelligence people see the possibility that it will turn out to be accurate,” Fox News reported Professor Shigemura as saying.

“I have identified and pinned down every source.”

Kim, 66, has not appeared in public for three weeks amid rumours he is seriously unwell and look Kim in 2004

While Seoul intelligence officials have said they believe he has diabetes and heart problems, they do not think he is near death.

But Professor Shigemura, from Tokyo’s respected Waseda University, believes that Kim actually died sometime during a 42-day absence from public in September 2003.

He claims that whenever anyone is granted a face-to-face meeting with today’s Kim, a senior official is always by his side “like a puppet master”.

Professor Shigemura’s claims, outlined in his book The True Character of Kim Jong-il, have been disputed by North Korean officials.

Pyongyang, North Korea – With reports of a severe illness having debilitated the North Korean leader, the spin machine in the isolated nation has been working in overdrive. From constant denials to apparently doctored photographs, the government has been doing everything it can to show the world that the ‘Dear Leader’ is alive and well. Now, Kim has appeared on national television to prove he is alive and well, and made a shocking change in the political and social climate of the entire country.

“We have long been an isolated country, we have long been at odds with our neighbours and the rest of the world but that all changes today,” said Kim in a speech. “I have taken time in isolation and come to the conclusion that the best way for the Korean people to move forward is through music. North Korea will eschew communism and become a hip-hop nation effective immediately. Bling will be issued to every resident starting tomorrow.”

While few details have been released on how the new government will be organized, one immediate change will be the national anthem. Replacing the decades old anthem will be Afrika Bambaataa’s ‘Looking for the Perfect Beat’ (here) and will play in all government offices and schools starting Monday. A redesign of the flag is also on tap, as well as a top down renovation of the schooling system.

“Children will be taught the way of Hip-Hop. Not only the grand history, but also the culture,” continued Kim. “Children must be taught the path, and through the path they will find freedom. It will take a nation of millions to hold us back from our destiny.”

Kim, long an admirer of western culture, has been rumoured to be a lifelong hip-hop fan which in part stemmed from his love of Basketball. In 2000 Former Secretary of State Madeleine Albright presented the leader with a basketball signed by Michael Jordan at the conclusion of a summit between the US and North Korea. He also reportedly uses pure silver chopsticks and has a massive fleet of Mercedes Benz S500’s at his disposal, putting him in line with the upper end of American hip-hop culture.

“From what I’ve heard he’s an old school guy. Grandmaster Flash, Bambaataa, Fab Five Freddy, those kinds of guys, apparently though he’s always got Wu-Tang Clan playing on his iPod. Supposedly his guilty pleasure is Lil Wayne and he shuts it off every time someone walks into the room,” said Scrape TV North Korean analyst Lee Joo-Chan. “That’s great and all but I don’t see how you can translate your hobby and musical taste into a political system. George Bush made a diligent effort in turning the US into a nation of country bumpkins but failed. It’s an interesting experiment but one that may be doomed to failure.”

Many are looking to Kim to implement the changes much like his father, Kim Il-sung, did when the North was driven into communism. While the younger Kim has been looked at as more of an eccentric rather than formidable leader, some believe that he may still have some of the drive and smarts that his father had.

“He is a little funny in the head, everyone knows that, but he’s got the same blood coursing through his veins and that may serve him well in the transition,” continued Lee. “But we need to see details. In a nation where millions of people are starving do they really need to be putting money into breakdancing lessons? Military service or turntable lessons? I don’t see how hip-hop culture lends itself to Socialism so it’s going to be a hard time getting people to see their country in a new way. More power to him, but it’s going to be tough. Word.”

Pyongyang, North Korea –Rumours are abound that Kim Jong-il, notorious dictator of South Korea has either died, fallen severely ill, or even passed away years ago and has been replaced by lookalikes ever since. His failure to appear at ceremonies marking the sixtieth anniversary of the founding of North Korea has caused even more of a stir in the intelligence community.

Talk that Kim had died many years ago started to surface in August after an article published in the Japanese newspaper Shukan Gendai. Circumstantial evidence seemed to back up the claim, though no hard evidence was presented. The latest talk of a possible stroke would seem to put a damper on the theory, but would likely result in the same outcome.

“If Kim did in fact die five years ago and was replaced by lookalikes, it would hardly be surprising,” said Scrape TV North Korean analyst Lee Joo-Chan. “If that is untrue and he has just recently become ill or died, it’s likely the regime would implement this procedure in order to cover it up. Whether the original story spawned the idea or vice-versa is an intellectual debate. I have little doubt that they would cover up his death whenever it happens. I wouldn’t be surprised if he’s around in one form or another for many years to come.”

North Korea is of course extremely closed and isolated from the rest of the world, so uncovering reliable information concerning any goings-on in the country is extremely difficult. That process is even more complicated when it comes to information about the “Dear Leader” whose face is plastered across the country and is revered in some ways close to a God.

“Kim is more than a leader, he has positioned himself as the life blood of the people and it would be incumbent on the government to maintain his existence whether it was fact or not. Kim has thrived on misinformation for many years and this would be no different,” continued Lee. “I think the more interesting talk would be how many people in the country could emulate him. The bouffant hairdo is hard to come by these days and even in North Korea I can’t imagine a whole lot of people lining up to double for a pudgy delusional midget. Of course they may not have a choice.”

The other option of course would be using stock footage of the dictator for public appearances and limit meetings with foreign dignitaries. There is at least one instance of footage being used in place of a live appearance, wherein footage from the movie ‘Team America: World Police’ was accidently broadcast across the country. That film features a literal puppet of Kim. The footage was quickly pulled and seems to have had no ill effects on the leader’s reputation.

“Kim is a very unique person to say the least, and I think it would be very difficult to replace him,” concluded Lee. “Of course with the way North Korea is run, fooling the people wouldn’t be an issue. I hope the South Park guys kept their puppets, they may come in handy again.”

Neither Matt Stone, Trey Parker, nor the North Korean government had any comment

4 thoughts on “The Funeral ceremony of Kim Yong Il”